You’ve probably heard it said: ‘The money is in the list’

Discover How Are Generating Up To 7 Figures...

Even Without Selling Anything!

To grow your business, you’re forced to either pay a fortune on ads, or to play an increasingly rigged game as a “content creator”…

…where you’re just one algorithm update away from losing everything – and watching all your traffic disappear.

The fact is, the last remaining marketing channel you can truly own is an email list.

And it still has the highest ROI, for two main reasons:

In this business, there is nothing as powerful as an engaged email audience that wants to read your content.

But what if you don’t have something to sell?

Or, what if you otherwise don’t want to be in “selling mode” all the time?

Well believe it or not, some of the most successful newsletters right now – comfortably earning 6-7+ figures – don’t sell anything.

How is this possible? 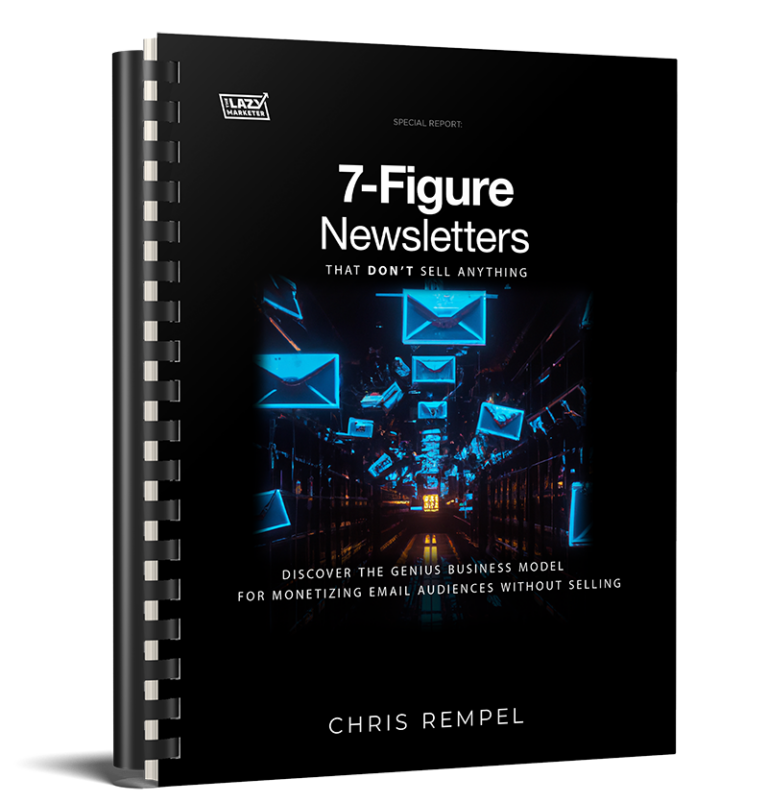 In Plain English: Building a list has always been the smartest online business model.

And finally, there’s a way to turn emails into serious revenue – without constantly pitching products…

Is this just selling ads in a newsletter?

While you can certainly still sell conventional ads, that’s not the crux of this strategy.

Without letting the entire cat out of the bag, what makes this so effective is that you’re involving your sponsors directly in your holistic content strategy; it’s a seamless, valuable experience for your subscribers – while still being totally transparent.

And it’s way more effective for your sponsors, and therefore commands a higher premium.

How hard is it to land sponsors?

As soon as you have even 1,000 subscribers, all it takes is reaching out to a few Marketing Directors around your target niche and letting them know what you’re building, which gets you on their radar.

Most will be very keen to at least run a test campaign with you to gauge responsiveness, even in the early days. (And they’ll be incentivized to work with a new & growing channel in its early stages).

Also, from my experience on the other side of the table, once you start publishing regularly in the niche, the motivated advertisers will find you anyway.

Obviously a lot of this will depend on your opt-in offer (what people get for signing up), as well as what channels you test and how quickly you find traction somewhere – but it’s not uncommon to see 50+ subscribers roll in each day just from sharing content in relevant groups on Facebook & LinkedIn, being active on Twitter, answering questions on Quora, or sharing useful content on relevant SubReddits.

And this can be dialed up even faster if you collaborate with existing influencers, or by scaling up paid campaigns.

We cover all of this in detail in the Blueprint (go to market) module.

How do I figure out my pricing for sponsorship, etc?

Almost every market will have active newsletter publishers with public media kits, etc. that will at least give you a working range for their $CPM rates by ad type, solo broadcast rates, and so on.

Since this model operates a bit differently (and will produce much more engagement than “ads”), you can basically take your competitors’ most premium advertising option and at least match the $CPM rate, if not multiply it.

We cover this all in depth.

What if I still want to sell products / other offers - can this work as a “bonus model”?

Running this strategy in no way detracts from or “cancels” your ability to monetize an email list with your own products / services or running related offers.

In fact, this is a great way to balance out revenues in the “down” months when you’re not running active launches or product promos.

Get insider access to the 7-Figure Newsletter Special Report, and discover the genius business model for unlocking substantial revenue from nearly any email list – even if you have nothing to sell…

And even from relatively “tiny” email lists.

(Which is roughly the cost of a pair of jeans). 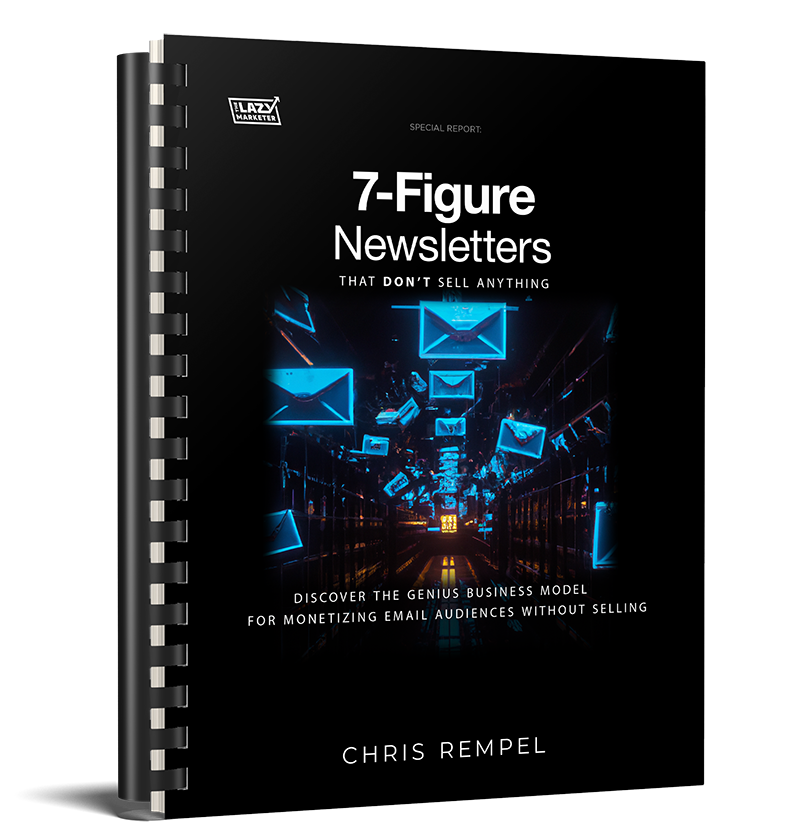 Get lifetime access to everything for just $99, one time.

Digital delivery: You’ll be sent login details via email to access your product within minutes of ordering.

Your satisfaction is guaranteed, according to our Terms & Conditions

Catching the Right Wave Can Change Everything...

If they’re honest (and if they’ve had enough to drink), most successful people will admit that while hard work & persistence are certainly a factor in their story…

…usually there was a pivotal moment that acted as a catalyst, forever changing their trajectory – setting everything else into motion.

Maybe it was building hundreds of AdSense scraper sites back in the early 2000’s.

Maybe it was being one of the first app developers on Shopify.

Years ago, my “moment” was a random marketing experiment. I created a really basic shareware tool that promoted a related product, and uploaded it to Download.com, which took all of 20 minutes.

I completely forgot about it until weeks later, when my web host notified me about hitting my traffic limits. Curious, I logged into my affiliate dashboard… and my jaw dropped.

That stupid, 20-minute experiment ended up driving millions of downloads, and generated about $80K in affiliate revenue over the weeks to follow. This was the catalyst, and I doubled-down on the strategy… ultimately earning millions over the next few years as a result.

This then provided the foundation for going on to build real brands & businesses for nearly two decades now.

What I do know is that my story isn’t the exception. Almost everyone I’ve met who’s “made it big” with something has had a similar catalyst or key decision that forever changed their trajectory.

For some – like me – it was basically random. But for others it was intentional; a calculated risk that paid off in spades.

As an entrepreneur, catching the right wave – even just once – can change everything. But you need to know where the waves are gonna be… and where to be positioned.

And that’s exactly what this report lays out in detail.

I hope to see you on the inside 😉 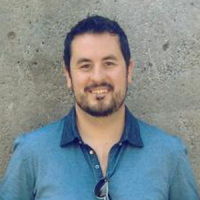 Get lifetime access to everything for just $99, one time.

Digital delivery: You’ll be sent login details via email to access your product within minutes of ordering.

Your satisfaction is guaranteed, according to our Terms & Conditions

There are a number of marketing & business growth strategies discussed on this site and inside the products showcased, along with a few examples of results from the author’s past experiences and endeavours. Growing a business, and generating results with marketing isn’t easy – it’s hard!

If it was easy… well, courses like this wouldn’t need to exist. The author has managed to produce impressive results with these strategies, but that’s also the cumulative result of years of determination, luck, perseverance and skill – and not just the specific strategies alone.

Your results will mostly depend on your own business acumen, experience and your business model. And you may not experience any results. Furthermore, the strategies described in this content may involve certain marketing & legal expenses to execute properly. The author strongly recommends that you consult with professionals who can advise you on how best to invest in the growth of your business, and how best to arrange client engagements, if you decide to act on some or all of the author’s suggestions.

I mean, seriously, just use common sense – and before taking action on anything, use this content as one of several sources that may inform any related decisions. To all the lawyers and people who love reading fine print, I hope reading this has been immensely satisfying.

For all intents and purposes, you should consider this content to be ‘for entertainment purposes only’.

ClickBank is the retailer of products on this site. CLICKBANK® is a registered trademark of Click Sales, Inc., a Delaware corporation located at 1444 S. Entertainment Ave., Suite 410 Boise, ID 83709, USA and used by permission. ClickBank’s role as retailer does not constitute an endorsement, approval or review of these products or any claim, statement or opinion used in promotion of these products.